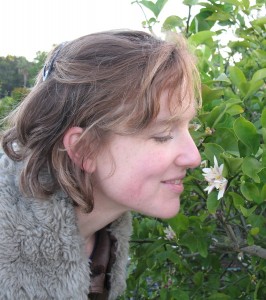 Eliza Douglas teaches independent perfumery classes and has given workshops at the Wallace Collection and Somerset House in London, for Daylesford and Soho Farmhouse in the Cotswolds, and for the Metropolitan Museum, New York Open Center, Brooklyn Brainery and U.S.S. Intrepid. She has worked with the charity Fifth Sense and taught visually impaired students with Art Beyond Sight for the New York Institute for Special Education and Visions Services for the Blind.

She is particularly interested in creating scents to help viewers, visually impaired and otherwise, experience paintings and other artworks.

Having worked for DreamAir, the innovative fragrance company founded by perfumer Christophe Laudamiel, for six years in New York, Eliza is now based in England.

She is the Treasurer for the Academy of Perfumery and Aromatics, the American branch of the Osmothèque in Versailles.

She is also the Fragrance Evaluator for Gallivant, a new niche perfume brand.

She studied at the Grasse Institute of Perfumery in France.

Feel free to get in touch with any questions or comments: eliza@elizadouglas.com